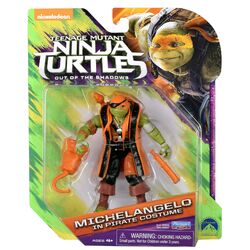 Michelangelo in Pirate Costume is an action figure released in 2016 by Playmates Toys for Teenage Mutant Ninja Turtles: Out of the Shadows.

The 5-inch basic action figures are highly detailed, fully poseable and uniquely sculpted to capture the personalities and distinctive appearance of the Turtles, their allies and their enemies in the movie.

Each figure comes equipped with its own unique accessories, like this movie-inspired pirate outfit for Michelangelo, complete with spyglass, detachable hook, and a parrot on his shoulder! 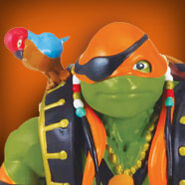 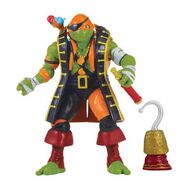 Add a photo to this gallery
Retrieved from "https://turtlepedia.fandom.com/wiki/Michelangelo_in_Pirate_Costume_(2016_action_figure)?oldid=496997"
Community content is available under CC-BY-SA unless otherwise noted.