The Hero on a Hinged Half Shell!


Mike used to take mid-battle breaks to scarf down some heavy duty pizza power, but now with his pizza-packing back, he keeps going and going. Mike can scrunch lots of pizza in his thermal storage shell, and even more if he didn't have to take along an anti-Foot arsenal. But Mike knows that without his pipe grappling hook and mini-sickle he could end up as Turtle-topping on a Foot Clan double crust special. So he packs his nunchukus and his flashlight (which also works as a portable pizza heater), just in case those party crashing creeps interrupt his snack. Now if he could only figure out a way to keep his ninja stars from getting gooey.

Loose figure (some accessories at bottom) 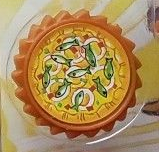 Back of card
Add a photo to this gallery
Retrieved from "https://turtlepedia.fandom.com/wiki/Michaelangelo_with_Storage_Shell_(1991_action_figure)?oldid=413484"
Community content is available under CC-BY-SA unless otherwise noted.