Metalhead appears in Teenage Mutant Ninja Turtles: Turtles in Time as the boss of the second level, Alleycat Blues. He has extending punch and kick attacks, as well as a machine gun in his chest.

This version was slightly redesigned for the remake, Turtles in Time Re-Shelled; this version of Metalhead was voiced by Wayne Grayson. 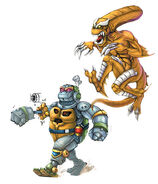 Add a photo to this gallery
Retrieved from "https://turtlepedia.fandom.com/wiki/Metalhead_(1987_video_games)?oldid=485047"
Community content is available under CC-BY-SA unless otherwise noted.