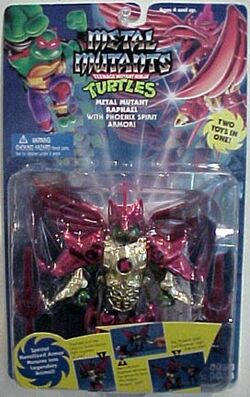 A battle older than time itself rages on. Good versus Evil in a timeless war with no end - until now. Metal Mutant Raphael has risen from the ashes and combined with the Spirit of the Phoenix to form the perfect fightin' combination. Outfitted with his metallized armor - the most powerful armor ever conceived - and his metallized Phoenix battle helmet with glowing eyes, moveable wings and Phoenix Sais, Metal Mutant Raphael is protected from the onslaught of attacks - and nothing can stop him! But with the risin' wave of wickedness in the world, Metal Mutant Raphael often calls upon the Spirit of the Phoenix: suddenly, swiftly, powerful legs, arms and Phoenix body are instantly mutated and formed from each piece of Raphael's mystical armor. Together with the Spirit of the Phoenix, the tide will surely turn, sending Evil on the run. Soaring through the darkest of nights, scanning the land, Metal Mutant Raphael soars with his Spirit armor and uses his wings to dive close into Foot territory. With lightning speed he raises his Phoenix sais and... the battle rages on!

Retrieved from "https://turtlepedia.fandom.com/wiki/Metal_Mutant_Raphael_(1995_action_figure)?oldid=438396"
Community content is available under CC-BY-SA unless otherwise noted.