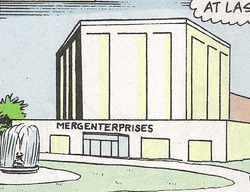 Mergenterprises (formerly Genterprises Corporation) was a chemicals company. April had found that they had developed an anti-toxic waste compound that was claimed to be able to regress mutations; since April had seen a despondent Splinter bemoan missing his human self, April tracked down the company to find the compound for him, although because of the name change, she had trouble locating it.

April's contact, intern Perri Grey, intended to show her around, but her boss, Dr. Koss, angrily denied her access, telling Grey that there were to be no visitors, citing a recent memo of procedure changes. However, as April was leaving, she witnessed Shredder henchman Tim London delivering chemicals to Dr. Koss.

April returned that night to investigate, and literally ran into Perry, who had become suspicious, herself, due to her boss' erratic behavior and the fact that there was no memo. Unfortunately, the two of them were caught by Mergenterprises' new owners - the Grem, a malicious alien species. As punishment, April and Perry were made test subjects of their new batch of mutagen, turning April into a mutant turtle and Perry into a mutant flying squirrel. They manage to escape, however, and recruit the Turtles and Splinter as backup.

The now five turtles, Splinter, and Perry storm Mergenterprises and beat up the Grem, including the newly mutated E'vel. As it turned out, the Grem had been brainwashing Dr. Koss into doing their bidding. However, since they used up so much of the anti-mutagen reverting E'vel, there was very little of the substance left, which Perry used on April. The Fifth Turtle

Retrieved from "https://turtlepedia.fandom.com/wiki/Mergenterprises?oldid=474080"
Community content is available under CC-BY-SA unless otherwise noted.