Start a Wiki
Mega Shredder was a gigantic crustacean mutant accidentally created by Bebop and Rocksteady.

After capturing Michelangelo and Leonardo, Rocksteady and Bebop had a plan to mutate the two into a giant two-headed turtle. Leo baited them into dumping in the Shredder Mutants first and as a result, the three merged together into one massive mutant, dubbed Mega Shredder by Mikey.

Mega Shredder rampaged over New York City, leaving Leo and Mikey to attempt to stop it. Mikey gets swallowed by Mega Shredder, leaving a despondent Leo alone, until help arrived in the form of Donatello, Raphael, April, and Casey in the Turtle Mech. The four of them in the Mech held off Mega Shredder long enough for Michelangelo to break free from its innards, severing its Oroku Saki-shaped tongue-brain. With a launch of an exploding barrel into the pained Mega Shredder's mouth, the Turtle Mech defeated Mega Shredder.

Mega Shredder resembles a blob with eyes, spikes and mouths on his heads, chest & belly. He also has a huge hulking arm and smaller, thinner arms and feet on his right side. He has metal plating, an armored tail and two stumpy feet. While we don't know much about his anatomy, we do see his stomach when Mikey gets swallowed by him. Like his outer appearance, his stomach is mostly organic but has numerous chunks of metal bulging out of the muscles. Like with any organism, it is slimy and has a pool of acid. It should also be noted that a parasite swims in the acid, and mutagenic veins line the walls. 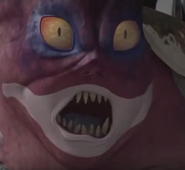 Retrieved from "https://turtlepedia.fandom.com/wiki/Mega_Shredder_(2012_TV_series)?oldid=474866"
Community content is available under CC-BY-SA unless otherwise noted.