"Meet Mondo Gecko" is the seventeenth episode of the third season of the 2012 TV series, and is the sixty-ninth episode overall in the series. It first aired on May 10th, 2015.

Michelangelo and Casey are befriended by Mondo Gecko, a radical skateboarding reptilian kid. However, Casey grows suspicious of their new comrade.

The episode begins with Michelangelo and Ice Cream Kitty watching the latest episode of Crognard the Barbarian. However, Mikey has become bored and wants to hang out with someone, so he begins to search the lair. His luck doesn't fare well as Leonardo and April are practicing their skills (Leo offers him to join but he refuses), Raphael is playing with action figures and angrily tells Mikey to leave upon being seen, and Donatello is working on another batch of Retro-Mutagen to cure the afflicted Karai. Just as he heads into the main part of the lair, Casey Jones is playing a video game. He has become annoyed though as he's constantly beaten the high score and has nobody to compete against. Upon hearing Mikey's cries of boredom, he offers to hang out with him, with Mikey happily accepting. The two then proceed to go skateboarding on the rooftops of New York City, where they are interrupted by a scream of "Cowabunga!", where a mutant gecko appears and skates above their heads, demonstrating excellent skills in the sport. Casey is completely shocked another mutant is loose in New York whereas Mikey thinks of a name for the creature, proclaiming him as "Mondo Gecko". However, the mutant returns to the duo and believes the name sucks, where he then proceeds to charge at Casey and Mikey utilizing his skateboard as a weapon.

As it turns out, he’s just kidding. He introduces himself as Jason, a pro skater. When Mikey asked how Jason became a mutant, he explains that about a year ago, he was skating late at night with his pet gecko, Lars, when all of a sudden, he was hit by some strange ooze turning him into a gecko person which to Jason is was awesome. Unfortunately, he was thrown out on the streets by his parents because of his mutation, but he was fine with it because he now has pro level skateboarding and demonstrates his skill and then claims to have a rock band named Savage Bliss. Casey doesn’t trust him, but Mikey feels responsible for him since it was technically the Turtles’ fault he was transformed from the mutagen spill.

Back at the Lair, Leo and April begin to worry about Mikey and Casey, for they have been gone for a few hours. April tries to call Casey and remind him of their homework and study sessions later for school, and Leo hopes that Mikey and Casey haven't got themselves into any trouble. Raph and Donnie, who both aren't worried so much as their oldest brother and human friend, both retort and claim that they aren't in any trouble.

As the three of them hang out, Casey nearly falls off a building until Michelangelo catches him, Mondo laughs with Casey angrily telling him that he could've gotten hurt, just as Mondo apologies, the three come across the Purple Dragons who are in the middle of stealing. When Mikey asks them what their doing, the Purple Dragons explain that their helping a friend move their valuables to their lair, Mikey doesn't think anything of it until Casey points out that their obviously lying. Mikey demands that they put the valuables back, Hun arrives, asking whose going to make them, as a fight breaks out between the Purple Dragons, Mikey and Casey, Casey is getting beat up by Hun while Mikey is beating up the rest of the Purple Dragons. At first Mondo hides until he is discovered by Hun and tries to fight him off but with little success, Hun kicks Mondo off the building where he is then saved by Mikey. After rescuing Mondo, Michelangelo takes out the other Purple Dragons, just leaving him and Casey up against Hun, while they fight against each other, it seems that Hun has the upper hand until he steps on a skateboard and falls into a trashcan at the bottom.

With the fight over, Mikey ties up the remaining Purple Dragons, Mondo then proceeds to taunt the Purple Dragons and smack them until he is held back by Casey who tells him that they have already won, Mondo thanks them for saving his life and tells them while on the streets it's everyone for themselves, where as Mikey tells Mondo that friends don't let each other fall off buildings. While Casey leaves his calling card on the Purple Dragons for the police, Mondo finds $30,000 on them and attempts to steal it, when Mikey calls Mondo out on that, Mondo says it's okay since it's from the bad guys where Casey demands that he puts the money back where it belongs.

An argument breaks out between Casey and Mondo with Mikey acting as a mediator, begging them to just go back to skating where Casey leaves saying he doesn't hang with criminals. Mondo yells at Casey saying skating isn't a crime and then invites Mikey back to his place. After leaving Mikey and Mondo, Casey complains that Mikey has fallen for Mondo's act where he doesn't. While in the alleyway, Casey gets captured by an unknown assailant.

Meanwhile back at the lair, Donnie and Raph are facing each other off in a game where Raph ends up as the winner, when looking for another challenger he calls for Casey until he realizes that he is still out. Leo remarks that Mikey and Casey have been out all night, where Raph notes that Casey and Mikey are big boys and can take care of themselves. After Leo gives him a questioning look, Raph agrees and calls Casey by phone, when he doesn't get a signal on Casey's phone and April can't get through to Mikey, Donnie states that Mikey still has a signal that he can track and tells them they should go look for them.

Back with Michelangelo and Mondo, Mondo leads Mikey to the sewers where the latter exclaims that Mondo lives in the sewers too, Mondo explains to Mikey that Mr. X has taken in a lot of mutants including himself in, while venturing into the sewers Mikey becomes trapped in a cage while trying to break free, Mikey tells Mondo to run, Mondo apologizes and is revealed to be one of Xever's lackeys and that Xever is Mr. X. Mikey looks over to Mondo and asks him why has he done this when he thought they were friends. Mondo questions Fishface about whether the turtles were as bad as Xever says they are, Fishface tells Mondo that he shouldn't feel sympathy towards him for tonight Mikey is going to part take in a race to the death, surprised, Mondo tells him that is not part of the deal and that he thought it was just a normal race, Xever slaps Mondo. Mikey asks why Fishface is doing this, Fishface replies that it is simple economics, he brings mutants in to part take in races, he makes money and everyone wins, except for Mikey for Fishface explains that Mikey will lose, he tosses Michelangelo into a cellar with Casey.

Meanwhile, the other turtles along with April are still tracking Mikey's signal until it is lost, April states that, that can't be good, Raphael tells them to listen to the police radio where they hear that the police found the Purple Dragons with Casey's calling card, Leo says that at least they know it's close and that they should head that direction.

Michelangelo and Casey are still in their cell, where Casey tells Mikey off for trusting Mondo, Mondo appears and attempts to release them from the cell until he is found out from Xever, and for Mondo's betrayal, Xever places Mondo in the race. When the lights come on, it is revealed that the rest of Shredder's henchmen along with some of the Turtles' mutant enemies from the past and certain members of the underworld are there to see the race. while introducing the contestants, Xever enters himself into the race, Casey states that if he can't beat giant fish in the race then he will retire his blades, Mondo tells him that Casey is wrong and that he has seen Fishface skate and panics where he is then smacked by Mikey and comes back to his senses.

Baxter starts the race, during the race, Fishface reveals that he has rocket skates, going through trials that consist of electrified trashcan lids, an aquarium filled with piraña, giant boulders with spikes, arrows and closing doors, Casey gets caught between one door telling Mikey and Mondo to go on ahead to beat Fishface. Fishface releases oil on the ground, Mondo tells Mikey that Xever is going to win, Mikey doesn't believe that, through some teamwork with Mikey, Mondo and Casey, they manage to beat Xever over the finish line.

Xever calls them cheaters and tells them that they are an example of poor sportsmanship where Mondo disagrees, saying that Xever made him believe that it was everyone for themselves outside the streets, that the reason they won was because they looked out for each other and that friends don't let them fall off buildings. Xever calls Jason a traitor, where Mondo proclaims that his name is now Mondo Gecko and tries to punch Fishface, where Xever easily defeats Mondo and wonders if that was seriously all he's got?

Leo, Raph, Donnie and April arrive and knock Fishface back, as they jump out of the van, Leo recalls Raph saying that it doesn't look that got into any trouble. Fishface laughs and says that they have not heard the last of him, as he continues to laugh he is then crushed between the stone doors, as the other villains leave, April asks who this little guy is and that Mondo is cute, where Mondo replies that April doesn't look too bad herself and sticks out his tongue, disgusting April (as well as annoying Casey and Donnie). Mikey tells Mondo that Mr. X isn't his boss anymore and that Mondo is now free. Happy that he is now free and Casey commenting that Mondo is actually an okay guy, the gecko asks if he can say Booyakasha as where Mikey says it's okay just as long as he can say cowabunga once in a while, where he decides to do now, as both Michelangelo and Mondo yell Cowabunga!! 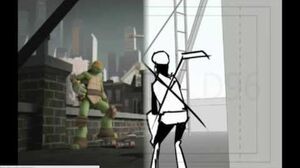 Inside Meet Mondo Gecko
Add a photo to this gallery
Retrieved from "https://turtlepedia.fandom.com/wiki/Meet_Mondo_Gecko?oldid=579188"
Community content is available under CC-BY-SA unless otherwise noted.