"Mazes & Mutants" is the fifteenth episode of the second season of the 2012 TV series and is the forty-first episode overall in the series. It first aired on April 27th, 2014.

The Turtles try to relax by playing a fantasy role-playing game, but when the game becomes real, they must learn the difference between fantasy and reality.

Tired after the recent events of "The Manhattan Project", the turtle brothers take time to relax and play a new RPG game that they discovered in the sewers: Mazes & Mutants. While Raph is bored, the other three are having fun. Splinter senses something wicked. Little do they know they are being watched by a mysterious wizard who says their real game is about to begin...

Obsessed, Leo creates a live version of the Mazes and Mutants game, and everyone except Raph, who is reluctant to agree, dresses up in costumes and gets ready to play. Leonardo is the brave Knight, Donatello is the magical Wizard, Michelangelo is the cunning Elf (with a precious magic ring),and Raphael is the Dwarf Barbarian! Raph finds dressing up very stupid.

However, when they face and slay a "tree troll" (thats just the foot ninja practice dummy with a monster mask), Leo is shocked to discover that the clue he had written has changed. The tunnels turn into real, live version of LARP gameplay, and the turtles meet the mutated sparrow wizard: Sir Malachi. He challenges the turtles to solve the puzzles and complete the quest, rescue Princess April O'Neil, and kill the fierce dragon guarding her. Monkey goblins (that look like Dr. Tyler Rockwell), lava pitfalls, and flaming boulders all stand in their path, which makes them all frustrated. While Leo tries to keep a cool head and figure out Sir Malachi's riddles, Raphael ends up upsetting the sparrow wizard and gets his head turned into a turkey as a result. Raph is very angry and starts gobbling.

Finally, all obstacles passed, the turtles find themselves with the captive April, and forced to fight a monstrous fire breathing version of their friend Leatherhead. While fighting, Leo finally unravels the clues, and reveals to his brothers that everything they have seen has been just one big illusion. If they refuse to believe that anything is real, then Sir Malachi's powers will be gone. Unwilling to let the turtles go free, Sir Malachi attacks all their minds at once, and Leo, Don, and Mikey quickly break the hold. Raphael however, is harder to convince, and he struggles to disbelieve everything around him. He finally does, and all the illusions Sir Malachi created shatters, including Raph's turkey head.

Surrounded now by angry turtles, Sir Malachi explains that his real name is Martin Milton, and he is a huge Mazes and Mutants fan. One night, mutagen rained down from the sky while he was feeding some birds on the roof, and he changed and transformed to become Sir Malachi, sparrow wizard. Going to the sewers to play a solo LARP, the newly named Sir Malachi, decided to secretly gift the turtles with Mazes and Mutants game, and became very pleased when they liked it. Having others to enjoy it with, Sir Malachi made the game come alive so he could no longer be a solo LARP-er. Feeling sorry for the poor sparrow, the turtles allow him to walk away with the promise to never force anyone to play the game again. Sir Malachi agrees, fist bumps Leo, and walks, his illusions following behind him. The turtles leave with Mikey trying to catch up, dropping his +1 Ring of Awesome. 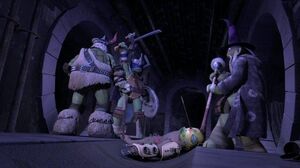 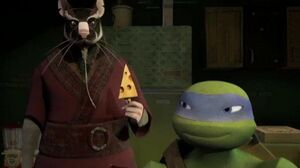 Retrieved from "https://turtlepedia.fandom.com/wiki/Mazes_%26_Mutants?oldid=571500"
Community content is available under CC-BY-SA unless otherwise noted.