Matthew Hagen was an actor whose face was badly damaged in an accident. In order to keep a continued supply of the restoration cream Renuyu coming to him, Hagen worked for the malicious manufacturer of the cream, Roland Daggett. After failing in a mission, Daggett shoved massive amounts of Renuyu down Hagen's throat. Hagen was transformed into a giant amorphous blob who called himself Clayface.

Hagen was one of the Arkham Asylum inmates who escaped via a Kraang portal, into the New York City of the Turtles' world. While in the sewers, he snatched up Michelangelo and briefly impersonated him, before attacking the Turtles and April O'Neil. After realizing that the sewer water was causing him to dissolve, Donatello opened a valve, dousing him with a large amount of water to defeat him. 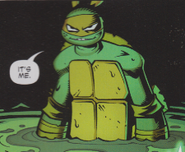 Add a photo to this gallery
Retrieved from "https://turtlepedia.fandom.com/wiki/Matthew_Hagen_(DC_Animated_Universe)?oldid=568146"
Community content is available under CC-BY-SA unless otherwise noted.