Masato was a former leader of the Foot Clan and Hamato Yoshi's sensei.

Masato and his best friend Oroku Maji were born in Japan during the 16th century and were part of the Foot Clan, which was founded and led by the former samurai Takeshi Tatsuo for over a hundred years. Both men were deeply disturbed by the bloodthirsty nature of their clan leader, as well as perturbed by his apparent immortality.

Their suspicions of supernatural assistance were confirmed during the conquest of Lord Daisuke's lands, when they accidentally observed Tatsuo being visited by the shape-shifting sorceress Kitsune. They ended up conspiring with a group of like-minded ninja to overthrow and kill Takeshi. They soon discovered that he was not aging because of a monthly potion that Kitsune brought him, and that this was given to him by the Tetsu Oni in exchange for the gradual conquest of Japan.

They waited until the following month to make their move, attacking just as Takeshi was about to take the potion. Maji and Masato were able to slay him with relatively little trouble, though Kitsune escaped them.

Maji and Masato took over the leadership of the clan and led them into a time of peace, in which the Foot only killed those whose elimination they had been hired for. Masato himself was also responsible for the training of Hamato Yoshi, and his wise teachings for his pupil represent an important guide for his next life as Splinter. However, the spirit of Tatsuo Takeshi was reborn in Maji's son, Saki.

When he was an adult, Kitsune contacted him, leading him towards her home. Maji and Masato sent a large force of Foot Clan ninja after him, and an attack from one of them led Saki to believe that his father had betrayed him.

Masato was murdered by Saki after the latter returned home, as a punishment for the killing of Takeshi. He was shortly afterwards joined by his old friend Maji. 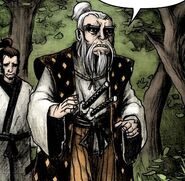 Add a photo to this gallery
Retrieved from "https://turtlepedia.fandom.com/wiki/Masato_(IDW)?oldid=469746"
Community content is available under CC-BY-SA unless otherwise noted.