Marra is Professor Honeycutt's wife in the IDW comic series.

In the IDW continuity Professor Honeycutt had a family, consisting of his wife Marra and a six-year-old son named Ely. The Honeycutts are all from the homeworld of the Neutrinoss, a peace-loving humanoid race from Dimension X, which were enslaved by the tyrannical Utroms.

One day the Honeycutts were collected by the Utrom ruler Quanin, so that he should find a way to keep the dwindling supplies of the ooze vital for the Utroms - a task that proved impossible, since Quanin insisted on the exploitation of the ooze to continue his expansion plans. The Utrom empire finally collapsed as a result of this ruthless exploitation, Krang Quanin's son continue to keep the service of Professor Honeycutt so that he could build a Simulated Anthropomorphic Lifeform (or SAL) for the gigantic Technodrome.

Honeycutt, who was a peaceable, gentle man, wanted to deny these plans; however, he was too weak to make to any real resistance. Only Marra, who was also concerned about the plans of Krang and their psychological impact on her son, was able to convince her husband to join the Neutrino resistance movement against Krang, and both accompanied him to freedom. Later, the hiding place of the Honeycutts was discovered and bombed by Krang's troops, Marra, Ely and several other Neutrino civilians were trapped in their living quarters by an emergency protocol. To save them, Honeycutt was forced to permanently put his mind in his research robot SAL. He succeeded to free his family and the other fugitives, but they ran outdoors straight into a trap set by Granitor and died in a fire bombing. The violent death of his wife and his son finally persuaded Honeycutt to put up active resistance against Krang's destructive plans. 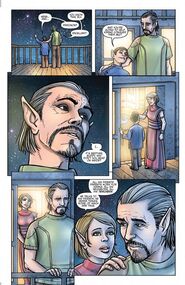 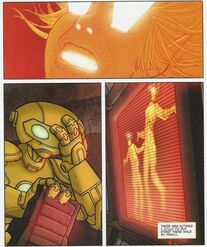 Add a photo to this gallery
Retrieved from "https://turtlepedia.fandom.com/wiki/Marra_Honeycutt?oldid=484120"
Community content is available under CC-BY-SA unless otherwise noted.