Louis Braunze was a member of DARPA in the 1950s, where he volunteered for a mental ability enhancement program. 40 years later, he was a resident of the apartment complex owned by April O'Neil and Casey Jones, and witnessed DARPA agents searching their flat. Later, after DARPA had taken Raphael following a scuffle with Baxter Stockman, he assisted with his knowledge of the organization and helped them free Raphael. After the adventure, he used his mental powers to force everyone to forget what happened, save Leonardo.

In Volume 4, he is known as one of Shadow's honorary uncles, along with the Turtles and Stainless Steel Steve. 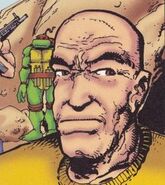 Add a photo to this gallery
Retrieved from "https://turtlepedia.fandom.com/wiki/Louis_Braunze?oldid=507333"
Community content is available under CC-BY-SA unless otherwise noted.