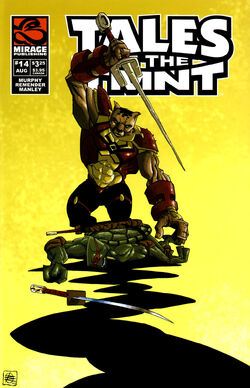 Loops, Part 2 of 2 is issue #14 of Tales of the TMNT volume 2, published on August 2005 by Mirage Studios. It contains a backup story, First Mud.

The teenaged Leonardo attacks the cheetah people for beating down middle-aged Leo. The cheetahs speak, causing old Leo to lament about how he had vowed never to kill a sentient being and thus cannot bring himself to slay them. Instead, he zaps one with his carbon bokken, which can summon bio-electricity via willpower (a gift to him on his hundredth birthday by Donatello). Young Leo guts the other one, but then the turtles are ambushed by a chained gorilla. The gorilla is fast and strong, but old Leo realizes he is chained and thus subservient, and he bargains with him, offering him freedom. A cheetah woman appears, holding the other end of the chain, declaring that Mon-Ghat has accepted his lot in life. Teen Leo threatens her, but she counters with a threat of her own, to kill young Leo unless he drops his weapon.

The woman, Dineesha, tells Mon-Ghat to tie up the Leos, and his family may get to live another week. He complies and she takes them to see King G'Dello. G'Dello states that the place they have come to Feenosia, and demands to know why they are there. Old Leo tells them that they have come with a gift for The Cynocea. G'Dello laughs and offers to take them to The Cynocea... the baby Pai-Doth Noor, who would have been ruler had G'Dello not slain his father, Macquo-Doth Noor and taken his title. G'Dello says that out of benevolence, respect for his father's warrior spirit, and political reasons, he's left the baby alive. G'Dello forces Teen Leo to show him the gift, which is a gem that the King deems of no worth. G'Dello casts the gem to the ground and leaves the room.

One of Noor's nannies picks up the gem and gives it to the baby, who then consumes it. Pai-Doth Noor swallows the gem, and the adult Noor gains the memory of the gem's taste, deeming that the Leos were successful before suddenly dying, regardless.

Back in the past, baby Pai-Doth Noor suddenly has all of the memories he's ever had. Noor begins to expound that rather than suffer the fate of being trapped forever in the nursery-cum-prison that G'Dello had sealed him, the nannies, and now the Leos, in, he would be able to hone his mental abilities and escape onto an astral plane, observing realities, but to never return to the physical world.

The Leos and Noor take to their escape, with Noor re-summoning the weapons they were stripped of. The Leos encounter the cheetah guards on their way out, as well as Mon-Ghat again. They repeat their offer to Mon-Ghat once more, and this time, he accepts, assisting in the battle. The Leos, Mon-Ghat, and the nannies battle the cheetahs until they are all disposed of.

Pai-Doth Noor goes to send home the Leonardos, and Old Leo offers to stay, as he has a terrible premonition. The Turtles are sent back on their way, anyway, with Noor saying he can handle what comes next. However, at that moment, the Egyptian army is camped outside the castle, ready to invade.

Each of the Leonardos is sent back to their own times, but young Leo is inexplicably dropped into the Egyptian wing of a museum. He sees on the wall, an etching of a four-armed monkey's corpse being carried on a stick between two Egyptians. A guard catches a glimpse of Leo, who splits, but the guard notes that the relief Leo saw wasn't there previously. The Leos reflect on the wisps of the adventure that they can remember, with old Leo reasoning that cheating death is not completely possible, not for Noor, and as far as he knows, not even for himself.

Frontispiece.
Add a photo to this gallery
Retrieved from "https://turtlepedia.fandom.com/wiki/Loops,_part_2_of_2?oldid=532803"
Community content is available under CC-BY-SA unless otherwise noted.