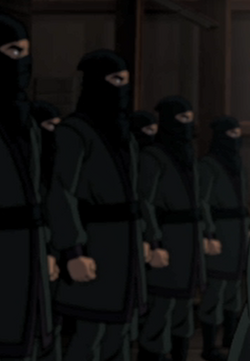 The League of Assassins are an international organization of the world's greatest killers. They are lead by Ra's al Ghul, a centuries-old assassin from Saudi Arabia.

In Batman vs. Teenage Mutant Ninja Turtles, Ra's and Shredder join forces, bringing their armies of the League of Assassins together with the Foot Clan as allies. Members of both guilds are also subjected to mutation.

Retrieved from "https://turtlepedia.fandom.com/wiki/League_of_Assassins_(Batman_vs._TMNT)?oldid=483590"
Community content is available under CC-BY-SA unless otherwise noted.