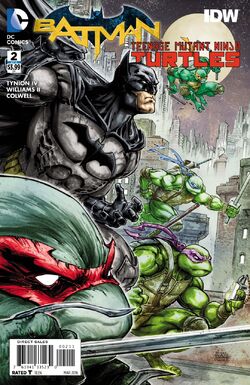 Trapped in a world where they can scarcely tell friend from foe, the Turtles' first encounter with the Dark Knight puts their fighting skills to the ultimate test. And while Batman and scientist Lucius Fox search for any clue as to where these strange ninjas come from, Shredder strikes a deal with The Penguin!

Michelangelo bursts into a pizzeria with news that "a crazy guy in a bat suit is trying to kill us!", and his appearance causes the people to panic. Batman pulls him out with a grappling hook to where the Turtles are preparing to attack him all at once. His fighting skills push them to the limit, and Raphael ends up tased by the Batmobile, leaving him unconscious on the ground. Batman uses their own weapons against them, even breaking one of Leonardo's katanas with Raphael's sai. But even without his sword, Leonardo is strong enough to get in a hit on the costumed superhero.

The fight is interrupted by Splinter, who orders his children to leave. He distracts Batman by fighting him for a moment, then using a smoke bomb to escape.

At an Internet cafe, the Turtles regroup and learn more about their mysterious assailant. Michelangelo begins charting Batman's attributes to figure out just how awesome he is. Raphael rages that Donatello is getting "comfortable" with this dimension rather than working on a way to get them back to their own through a portal the Foot Clan is building, so they won't be trapped there forever.

Meanwhile, Batman and Lucius Fox are analyzing the sai that he took from Raphael, and figure out that it came from another dimension. The missing Dr. Khan might know something about it, since he was trying to create a dimensional portal, but the last crucial part of the portal is a resonance engine that Batman believes has been put on the black market, and which is headed to Gotham.

More concerning is the blood that they found on the sai, which has a mutagen that is becoming inert - any creature that was changed by it would eventually revert back to their original form. As Batman leaves, Splinter slips into the Batcave and examines the results about the mutagen.

Elsewhere in Gotham, Shredder confers with the Penguin, who has just arranged the delivery of a WayneTech resonance engine. When he confirms that he doesn't have the money they were expecting, Penguin orders the goons to kill the Foot Clan leader... only for a small army of ninjas to leap out and attack. As they dispose of Penguin's men, Shredder prepares to kill Penguin, but Penguin manages to wheedle him into letting him live in exchange for weapons and money.

Crawling through caves, the Turtles are given the bad news about the mutagen and what is going to happen to them if they don't get home soon. They emerge in the Batcave, to get Batman's help.

Add a photo to this gallery
Retrieved from "https://turtlepedia.fandom.com/wiki/Last_Turtle_Standing?oldid=504587"
Community content is available under CC-BY-SA unless otherwise noted.