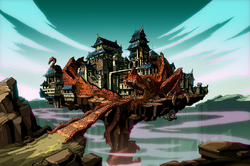 For the episode of the same name, see Lap of the Gods (episode).

The Lap of the Gods is the Ninja Tribunal's Monastery.

The Ninja Tribunal established the Lap of the Gods as their monastery after defeating the Tengu Shredder and separating his three artifacts. For centuries they lived and trained here, preparing for the day when the Shredder would return. In modern times, they were visited by their pupil The Ancient One and his student Hamato Yoshi, the latter seeking their aid against the Utrom Shredder. The Tribunal refused to aid him, knowing that the key to the eventual defeat of the true Shredder lay in Yoshi relocating to New York City. Later, the Ancient One paid the Tribunal another visit and was followed by a demon seeking to recover Shredder's sarcophagus. The demon's efforts were thwarted by the turtles and Splinter, and the Tribunal noted that the four youngsters had great potential.

Years later, after collecting the turtles and four other students to serve as their Acolytes, the Ninja Tribunal brought them to Japan and the Lap of the Gods. They were joined here by Splinter and the Ancient One, the former of the two reluctantly agreeing to the Tribunal training his sons. The Acolytes were then subjected to a powerful illusion of a powerful Tengu attacking the Lap of the Gods, to demonstrate to them that the training they were about to go through would test everything they had ever known. The training then began in earnest, with most of the students gaining powerful weapons such as the Fangs of the Dragon and learning to manifest great powers, including astral forms.

The Acolytes brought Shredder's helmet back to the Lap of the Gods for safekeeping, but in doing the same with the Shredder's gauntlet they played into the hands of the Foot Mystics. The mystics launched an attack, and succeeded in recovering all three artifacts and seemingly slaying the entire Tribunal.

In the episode "The Journal", Leonardo and Karai are at Lap of the Gods with the Ninja Tribunal. This is part of the fake stories written by Splinter and Cody.

Retrieved from "https://turtlepedia.fandom.com/wiki/Lap_of_the_Gods?oldid=386410"
Community content is available under CC-BY-SA unless otherwise noted.