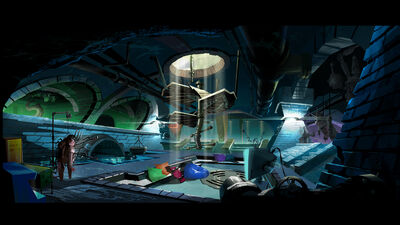 The Lair of Splinter and his four turtle sons—Leonardo, Raphael, Donatello and Michelangelo—is located underground, beneath New York City.

Fifteen years before "Rise of the Turtles, Part 1", Hamato Yoshi and his four new pet turtles mutated, and Yoshi sought refuge underground, squatting secretly in an abandoned subway relay station, connected to a sewer and an abandoned subway tunnel. Yoshi improvised a home there, and raised the four mutant turtles as his own adopted sons and Ninjutsu students, who would call Yoshi by his new name "Splinter". Sometime after their mutation, the family recovered a non-mutant tortoise who became Raph's pet turtle Spike. For 15 years, the family farmed their own algae and worms as food. Splinter's four turtle sons spent virtually all their time in the lair until their 15th mutation day, when Splinter allowed them to visit the surface for the first time in their mutant lives.

The lair has been seen in almost all episodes. The main room of the subway relay station has been fashioned into the lair's common area. In addition to a common area, there is also a kitchen, a dojo for practicing Ninjutsu, several bedrooms and Donnie's lab. The common area and dojo each have skylights that shine down natural light during the day. The lair is also wired with electricity and plumbed for running water. In the common area, there is a "moat" of water that surrounds the dojo on three sides; this moat connects with New York City's sewers, though the moat itself appears to be clear, relatively clean water.

The lair was discovered by the Kraang in "The Invasion, Part 1" near the end of Season 2, and upon this discovery they finally launched the full Kraang invasion of Earth, starting with the opening of Kraang portals directly inside the lair. The common area, kitchen, dojo and Shellraiser were severely damaged during the fighting. The rest of the lair was structurally intact, but it was no longer secret and safe to live in. In The Invasion, Part 2, April and the Turtles (without Leonardo who had recently been gravely injured) briefly returned to the lair's ruins to collect a few precious personal belongings and Ice Cream Kitty before abandoning their home, unsure that they could ever return.

While the family was away, the Kraang booby-trapped the lair with a security drone that would shoot any living creature its scanner detects. The turtles quickly discovered this when they briefly returned to the lair in Return to New York to search for the missing Splinter. As such, when the turtles finally recovered Splinter, they temporarily hid inside the abandoned Antonio's Pizza-Rama store.

After the Kraang were defeated and expelled in Battle for New York, Part 2, Splinter and the turtles reclaimed the lair in Casey Jones VS. The Underworld, repairing the damage left over from the invasion. By Clash of the Mutanimals, Donnie had repaired the Shellraiser as well.

The lair itself is a converted subway relay station, though it connects to the sewers.

Raph and Mikey's bedrooms are shown to be located in the hall in the back of the lair where there are four doors and an alcove of shelves. But the show has not been consistent in showing which door leads to which room, and their locations vary from episode to episode, with Raph's room inconsistently shown in two separate locations during the episode Slash and Destroy alone. However, the doorways to the kitchen, Donnie's lab, dojo and Splinter's room have all been consistent locations during the series.

There is presumably a bathroom as well as bedrooms for Leonardo and Donatello (if Donnie's lab is not also where he sleeps), but they have never been shown in the series.

Official details about the turtle's lair.

Add a photo to this gallery
Retrieved from "https://turtlepedia.fandom.com/wiki/Lair_(2012_TV_series)?oldid=532865"
Community content is available under CC-BY-SA unless otherwise noted.