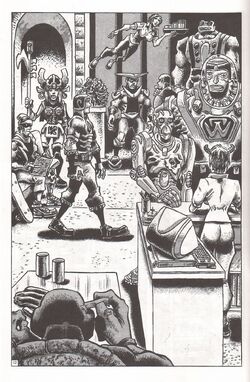 Kurtzburg Memorial Hospital is a health and recovery facility for "supers"—superheroes, aliens, and other irregular beings. It first appears in Teenage Mutant Ninja Turtles issue 2 (Volume 4). In the previous issue, Michelangelo was clipped by a bus and went unconscious. A superhero called Magnrok called for an air ambulance, which after he'd fallen out and been placed back into it by Raptarr, took him to Kurtzburg Memorial to get patched up.

The Turtles' ally Zippy Lad sits on the board of directors of the hospital.

Retrieved from "https://turtlepedia.fandom.com/wiki/Kurtzburg_Memorial_Hospital?oldid=484620"
Community content is available under CC-BY-SA unless otherwise noted.