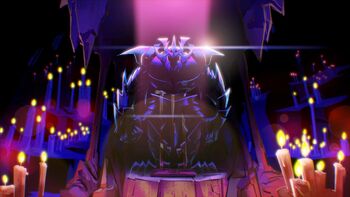 The Kuroi Yōroi, also known as the Dark Armor, is a mystic suit of armor worn by Oroku Saki in Rise of the Teenage Mutant Ninja Turtles which merged with his mortal body and entrapped his soul, becoming the Shredder.

The Kuroi Yōroi is made of a mystic metal that is capable of repairing itself if broken, and which is attracted to other pieces of the armor. Five hundred years before the events of the series, the Kuroi Yōroi was worn by a leader of a clan called the Foot, Oroku Saki, after making a deal with a "demon" in desperation to save his clan. He and the Foot Clan later spread chaos through Japan, during which it was said that the suit had "swallowed [his] soul". When the Shredder was defeated by Splinter's ancestors, the Hamato Clan and it's leader, Oroku Saki's daughter, the armor was broken apart and spread across the globe so that the pieces would never be reunited, and the Shredder would not be revived.

In "Shadow of Evil", Splinter learned that the pieces of mystic metal that Baron Draxum and the Foot Clan had been gathering were, in fact, pieces of the Kuroi Yōroi, and unsuccessfully attempted to keep a piece of the chest plate out of their hands.

One of the gauntlets was found in a jewelry store in a mall, where it was being used as a display piece for a ruby ring. Another gauntlet was lost by the Foot Clan during its recovery, and was instead found by Warren Stone, who discovered it increased the strength of one of his arms and allowed him to shoot energy blasts. While the gauntlet remained in Warren's possession for a time, it was ultimately retrieved by Baron Draxum, who had recently become an ally of the Foot Clan. The armor's lower greaves were found in the possession of Sunita (a slime yōkai befriended by April O'Neil), who had been wearing them as boots. The armor’s faceplate was kept by the Hamato Clan and eventually Splinter as part of a teapot, later given to Baron Draxum in exchange for his sons' safety. It was added to the armor, finally completing it so it could be worn by Draxum.

After being defeated by the turtles, it is revealed that the armor had been consuming Baron Draxum's mystic energy to regain it's original state, allowing the Shredder's physical body return to the world and go on a rampage without having senses as to what it is doing. The Shredder was eventually and temporarily taken down by the turtles with a mystic collar before giving it to the crime boss yōkai ,Big Mama, after she had sworn to take care of it properly. It is later revealed that Big Mama had been using the body to win battles in her Battle Nexus arena to serve as her champion under the name of Shadow Fiend. Afterwards, the Shredder regains conciousness after having been accidentally freed by the turtles when they freed Karai, who had defeated the Shredder the first time by sacrificing herself to become a sword which served as a lock for the Shredder's consciousness in a dimension called the Twilight Realm.

The armor is later finally destroyed by the entire Hamato Clan with the use of Hamato Ninpō, setting Oroku Saki's soul free and ending the Shredder's existence and reign of terror once and for all.