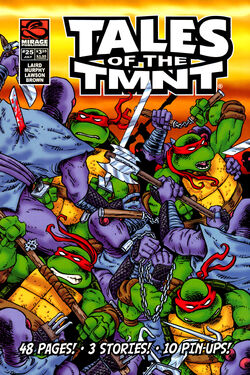 Kung-Fu Theatre is issue #25 of Tales of the TMNT volume 2, published on July 2006 by Mirage Studios. It contains two backup stories, The Doors of Deception and My Hero!.

The Turtles and Foot crash a midnight showing of a Bruce Lee movie.

At a private, midnight showing of Bruce Lee's Enter the Dragon, students from two different schools of kung-fu - Crane and Dragon, gather. The private showing is sponsored by the sifu of each style, hoping that it will prove common ground and encourage the rivalry between the to schools to end.

Meanwhile, on the Manhattan rooftops, the Turtles battle the Foot. After Raphael tackles two Foot off of a rooftop, the three of them crash through the skylight of the theater. The kung-fu students are understandably nonplussed at the party crashers, but after seeing his "man" Bruce on the screen, all he can do is complement the choice of movie. Raphael snaps out of it long enough to warn the patrons of the incoming remainder Turtles and Foot. The Turtles and Foot continue to fight, as the two kung-fu schools look on; they begin arguing whether the "Turtle guys" or "Ninja guys" are winning. This leads to the students fighting one another as well, and the Turtles take this as a cue to vanish.

Just then, the police burst in to the theater to find the students fighting (the Foot had obviously left as well). Upon demand of the situation's events, the police are told about the "Turtle guy vs. Ninja guy" brawl. The police disbelieve the story and proceed to escort the lot of them out of the building as they continue to argue the merits over the two warring factions. In the final shot, the Turtles are perched on a rooftop, and Michelangelo declares that Turtle style is the best.

Frontispiece.
Add a photo to this gallery
Retrieved from "https://turtlepedia.fandom.com/wiki/Kung-Fu_Theatre?oldid=509366"
Community content is available under CC-BY-SA unless otherwise noted.