In the Mirage continuity, Kubira is the rat of the Japanese zodiac, and an important character in the backstory of Tales of Leonardo: Blind Sight. His character is based on one of the mythical Twelve Heavenly Generals of the same name. Kubira bears a strong likeness to Hamato Splinter.

Kubira himself is never seen in the story, but a statue of his likeness is seen standing in the audience chamber of Leonardo's daimyō in Leo's vision of a life as a samurai in feudal Japan.

According to rumors the daimyō had heard, the Leonardo in that vision was originally born to Kappa, the turtle demon, but was cast out of his house. The turtle was adopted and raised by Kubira, who gave him a pair of magical swords that channel their bearer's fury. The turtle had been sent out to kill Kappa with those swords, but then refused to carry out his mission.

The turtle became the samurai vassal of a daimyō, but was betrayed when the daimyō stole his magical swords, framed the turtle for their theft, exiled him, and sent the turtle's masked daughter Yumi to assassinate him. But like her father before her, Yumi disobeyed her orders and refused to kill her father.

Realizing he had been set up, Leonardo confronted his former daimyō and discovered him with the "stolen" swords. The daimyō attacked the unarmed turtle with the swords, but Leo gained the upper hand and disarmed the daimyō, who dropped his swords at the feet of Kubira's statue. The statue tipped over, knocked over a torch stand and started a fast-spreading fire which engulfed the daimyō's castle.

When Leo's vision ends, he tells Splinter very little of the vision, except that he saw Kubira the rat, whose likeness so resembled Splinter's. In a plot twist, Splinter mentions that Kubira thanks the turtle for returning the swords. 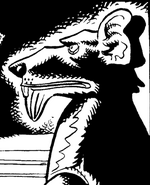 Add a photo to this gallery
Retrieved from "https://turtlepedia.fandom.com/wiki/Kubira?oldid=470105"
Community content is available under CC-BY-SA unless otherwise noted.