The issue opens on the planet of Neutrino. The Neutrino Resistance Fighters have been under siege by General Krang's forces for ten days, and are outmanned and outgunned. The leader of the Neutrinos, King Zenter, sends Commander Dask and his team of commandos to find Professor Honeycutt, the Fugitoid, and bring him back to help the Neutrinos turn the tide of the war.

Donatello and April O'Neil are repairing the generator at the Ninja Turtles' new home, the bunker underneath the abandoned church. Casey Jones arrives with pizza and Michelangelo asks if he saw Woody Dirkins, but he didn't. Master Splinter calls a family meeting and starts off by acknowledging the setbacks they have recently faced. They have all been tested and shown their courage and skill, and must use this as momentum to go forward, and form a proactive plan. He says that although their enemies benefit from alliances, they benefit from being a true family. They must act, and April knows where they should start.

General Krang has just brought Baxter Stockman to Planet Neutrino to show him the scale of the conflict he is currently engaged in and emphasize the need for Stockman to complete the Technodrome quickly. Stockman says it is beyond his skill to complete it. Krang tells him that his forces are currently hunting down the Fugitoid to use his advanced knowledge to help finish the Technodrome.

At the Foot Clan compound, the Shredder is asking why Oroku Karai has not begun trying to capture Leonardo so that he may enlist him as his second-in-command. She says that she has, but first she must level the playing field by procuring more of the Utroms' ooze.

April is having coffee with her coworker Chet Allen at the park late at night while Casey and the other Turtles watch from a distance. She is attempting to get any information she can about what's really going on at Stockgen. Chet warns her that she could endanger herself by asking too many questions, when all of a sudden Commander Dask and his commandos materialize, saying they're there to rescue him, as Chet is in reality Professor Honeycutt, the Fugitoid, in disguise. Casey and the Turtles immediately spring into action to protect April. Casey manages to get April to safety but the Neutrinos attack to protect Professor Honeycutt. The Neutrinos are teleported back to Planet Neutrino but the Turtles are taken with them, brought back into the midst of a battle between the NRF and Krang's stone soldiers.

Cover A by Ben Bates.

Cover RI by Andy Kuhn.
Add a photo to this gallery 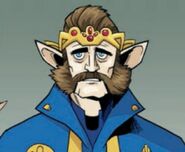 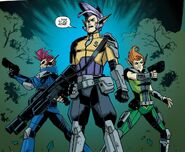 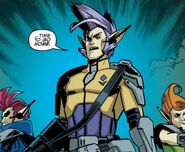 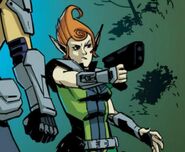 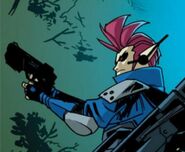 Retrieved from "https://turtlepedia.fandom.com/wiki/Krang_War,_part_1?oldid=428504"
Community content is available under CC-BY-SA unless otherwise noted.