The Bodiless Burbling Brain Behind the Foot Clan

Krang is all the brains a body could want. Unfortunately, Krang ain't got no body. He is, however, the mastermind behind Shredder and the Foot Clan.

Krang's ranting, burbling, chortling, raving antics are a few of the reasons he was banished from his home-sweet-home of Dimension X. Now, Krang brings his smarty-pants attitude to the decent planet Earth, where law-abiding citizens are threatened by his supreme intelligence.

Krang also supplies Shredder with his controversial Retromutagen, the transformation substance which is instrumental in their conquests. Krang's tentacles allow him to wrestle with his biggest headache, the Turtles - who pose a threat to his global dominance. 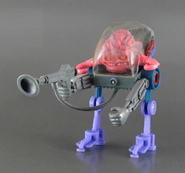 1994 carded re-issue
Add a photo to this gallery
Retrieved from "https://turtlepedia.fandom.com/wiki/Krang_(1989_action_figure)?oldid=532844"
Community content is available under CC-BY-SA unless otherwise noted.