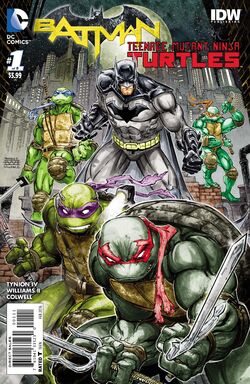 DC Comics and IDW team up for the crossover you never saw coming as two of the greatest entertainment icons meet for the first time! In Gotham City, a series of deadly raids leads Batman to believe he’s up against a group of highly trained ninjas known as the Foot Clan! Somehow, they’ve crossed over to another dimension and are determined to take advantage of the situation while looking to get back home. But they haven’t come alone: Leonardo, Raphael, Donatello and Michelangelo are hot on their trail. Get ready for excitement as heroes and villains from both worlds clash and team up in an epic battle that threatens the very fabric of reality!

A scientist recounts the events around the theft of an experimental generator - black-clad ninjas invaded a scientific facility, and prepared to kill everyone there. Four shadowy figures with "inhuman eyes" came in after killing the lights, and fought the ninjas who had already been there. But the generator was gone, and she is sure that the four mysterious fighters were the ones who took it. It turns out she is talking to Batman, and that this is the fourth such crime since the abduction of Dr. Naveen Khan.

On a street corner, a pizza boy finds his payment and a command to leave the pizza on the street. He does, and green hands pull it into a street grate.

In the Batcave, Batman has deduced that the robberies involve ninjas, but not the League of Assassins - and that they're building something dangerous. Alfred suggests that he's throwing himself into a "pet project" because it's almost the anniversary of his parents' death, but Bruce brushes him off.

Killer Croc and a gang of humans are roaming through the sewers, using a Batman-tracking device. They're planning to strip the Batmobile for parts, which would be worth a fortune. But then they stumble across a sewer lair that looks like "some teenager's bedroom": computer monitors, pizza, video games. The Turtles lurk unseen overhead as he searches for them, and suddenly leap down to dispose of his human allies, though Michelangelo is more interested in scaring them by claiming to be an alien. When Croc looms up behind them, they attack him all together.

The ninjas appear at another laboratory, only to find that the scientists they try to kill are actually holograms, and Batman is lying in wait for them. He defeats them all, and manages to interrogate one - he says they are the Foot Clan, and they are trying to get home. But before he can say anything about the Turtles, he's killed by a shuriken thrown by Shredder. Shredder threatens Batman if he crosses the Foot's path, and vanishes.

Raphael rages about how they have no idea how to get home, while Michelangelo mourns the loss of his Pony Racers video game. Splinter tells them that this lair is no longer safe for them, so the Turtles head topside, only for an enamored Donatello to spot the Batmobile parked nearby. And it turns out Batman is looming overhead, waiting for them.

by Kevin Eastman with Tomi Varga

by Cliff Chiang
Add a photo to this gallery
Retrieved from "https://turtlepedia.fandom.com/wiki/Knights_in_a_Half_Shell?oldid=495525"
Community content is available under CC-BY-SA unless otherwise noted.