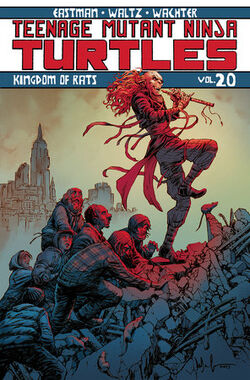 New York City is in ruins after the Triceraton Invasion. Various groups jockey for control in the power vacuum. But there is one who doesn't care about power, only chaos... the Rat King! Will the TMNT be able to stop him from doing the unspeakable?

A haunting tale of intrigue and deception!

Rat King’s sinister influence spreads, and New York City’s most vulnerable are at risk! The Turtles search out the Rat King’s family in a desperate attempt to find a way to stop him!

In an effort to thwart the Rat King, the TMNT travel to distant Siberia to try and enlist the help of his brother, Manmoth. The Turtles soon find that his welcome is less than warm in their new surroundings!