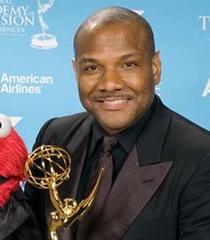 Kevin Clash is the voice and main puppeteer behind Master Splinter in the first two TMNT movies. He is most well known for his role as Elmo on Sesame Street.

In the fall of 2006, Clash released an autobiography titled My Life as a Furry Red Monster: What Being Elmo Has Taught Me About Life, Love and Laughing Out Loud.

On September 2012, he resigned from Sesame Street due to allegations of inappropriate sexual relationships.

Retrieved from "https://turtlepedia.fandom.com/wiki/Kevin_Clash?oldid=440963"
Community content is available under CC-BY-SA unless otherwise noted.