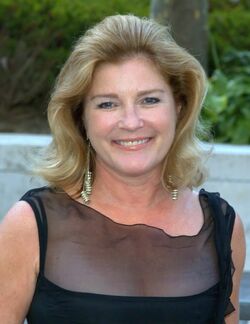 Katherine Kiernan Maria "Kate" Mulgrew (born April 29, 1955; 64 years old) is an American actress, most noted for her roles on Star Trek: Voyager as Captain Kathryn Janeway, on Orange Is the New Black as Red, and Ryan's Hope as Mary Ryan. She has performed in many television shows, theater productions and movies, earning a variety of awards for her acting, including an Obie Award, a Golden Satellite Award and a Saturn Award, as well as nominations for a Golden Globe Award and a Primetime Emmy Award.

In 2013, Mulgrew began starring as Galina "Red" Reznikov in the Netflix original series Orange Is the New Black, to critical acclaim. She received her first Emmy nomination for Outstanding Supporting Actress in a Comedy Series. The series, and her part, were renewed for a second and third season.

Mulgrew is an active member of the Alzheimer's Association National Advisory Council and the voice of Cleveland's MetroHealth System.

Mulgew voiced Zera in Half-Shell Heroes: Blast to the Past.

Retrieved from "https://turtlepedia.fandom.com/wiki/Kate_Mulgrew?oldid=509279"
Community content is available under CC-BY-SA unless otherwise noted.