Start a Wiki
Astronema was the main antagonist of Power Rangers in Space. As a child, her name was Karone and she was the sister of Andros, before she was kidnapped and raised as a villain. After the death of Zordon at the climax of that season, she was restored as Karone and later became the second Lost Galaxy Pink Ranger.

At the end of Save Our Ship, Astronema heads to Earth to recruit the Ninja Turtles, which she does in the following episode, using her Wrath Staff to control their minds. The turtles con the Rangers into letting them take over their ship, but an electrical storm knocks them to their senses and they turn on Astronema. 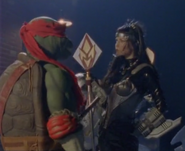 Add a photo to this gallery
Retrieved from "https://turtlepedia.fandom.com/wiki/Karone?oldid=516032"
Community content is available under CC-BY-SA unless otherwise noted.