In order to obtain an ancient artifact of great power, Karai must come face to face with a new creature unlike any seen before. Will it be her savior or her doom?

Natsu is shocked when she hears that Hayashi Toru is going to have Karai ambushed and killed when she emerges from the caves. Her grandfather says that he could not allow Karai to give him an ultimatum in his home and in front of his subordinates, and scoffs when Natsu protests that it's not honorable of him. He declares that he no longer puts any faith in honor, since he blames a sense of honor for the death of her parents.

So Natsu sneaks away and contacts Toshiro at Karai's apartment, warning him that Karai is walking into her grandfather's trap. Toshiro declares that she's coming with him to rescue Karai, since he doesn't yet know if he can trust her.

Outside Takeshi Tatsuo's vault, Karai, Koya and Bludgeon are surrounded by undead horrors, which Karai believes are a test. The dead taunt the visitors with their failures and losses, trying to provoke them into lashing out first, since they cannot attack without being attacked. Koya is mocked by demonic, rotted versions of the Turtles, and eventually lashes out at one of the zombies. She, Bludgeon and Karai barely make it through the doorway into the next passage, which is where the sword is located.

But the sword is guarded by a giant mole-creature named Ocho, who says that Karai can only have the sword if she can get past her. A vicious fight breaks out between the ninja and the mole, and Karai commands Bludgeon to throw her past Ocho, allowing her to claim the sword. 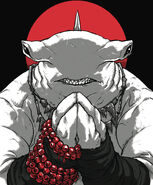 Add a photo to this gallery
Retrieved from "https://turtlepedia.fandom.com/wiki/Karai%27s_Path,_part_3?oldid=560653"
Community content is available under CC-BY-SA unless otherwise noted.