As Karai becomes embroiled in the Tokyo underworld, an ancient sword may show her the true path forward... if she can overcome the obstacles guarding it!

Toru invites Karai to sit down with him, and tells her the story of how Kublai Khan conquered what is now Korea, and then was inspired to conquer again by the spirit known as Chi-You. He decided to conquer Japan, and the Mongols began an invasion. According to legend, a man made a deal with the gods to have a sword of immense power that he would return after the Mongols were driven back.

Toru wants that mythical sword; while he doesn't believe it has supernatural power, he does believe that it would frighten his superstitious rivals. And it has a connection to Karai because Takeshi Tatsuo, the founder of the Foot Clan, reportedly acquired it. Karai says she'll consider his offer, and leaves.

A few days later, she's made up her mind. Toshiro is horrified that Karai has decided to pursue the sword, seeing it as forbidden and disrespectful, but Karai will not be dissuaded.

A plane flies over a forest, and a large box with Koya and Bludgeon inside is parachuted down to the ground. Koya continues to rage about the loss of her flight, even attacking Karai for telling her to "adapt," but Karai proves to be the superior fighter.

They traipse through the forest in search of Takeshi's cash of antiquities, and Karai stops briefly to meditate in order to find her way. She sees a vast white dragon who knows of her quest, and warns her that the sword is exactly what legends say it is, and that it has destroyed everyone who wielded it. But because she asked for its help respectfully, the dragon agrees to give it, showing her the way to the sword. She finds a Foot Clan symbol carved into a stone, and when she presses it, a secret passageway opens.

They walk down a stairway and fall into a hidden trap door, only to be surrounded by undead creatures on every side. 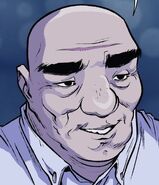 Add a photo to this gallery
Retrieved from "https://turtlepedia.fandom.com/wiki/Karai%27s_Path,_part_2?oldid=531039"
Community content is available under CC-BY-SA unless otherwise noted.