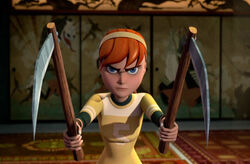 A kama (鎌) is a traditional Okinawan sickle. Like most weapons of Okinawan origin, it began as a farming tool, used to cut down crops. It may be wielded singularly or in pairs, with the latter being more common, and the Japanese martial art associated with them is called kamajutsu.

In Teenage Mutant Ninja Turtles, kama make frequent but normally unimportant appearances. The best known usage are as a common weapon included with some of the ninja character action figures in original 1988 releases. This version's blade more resembles that of the kyoketsu-shoge, a double-bladed kama attached to a rope and a ring.

Kama are a frequent weapon of Foot Ninja. They also, more often, wield Kusarigama, a kama with a weighted chain.

Alopex's main weapons are a pair of kama.

In Baxter's Gambit, kama are among the weapons April O'Neil tries out for her to train with. She accidentally throws one, causing it to almost come back and hit her, which it would have had Splinter not stopped it.

A pair of kama are forged by Michelangelo during the Vision Quest storyline and function as his chief weapons in this period.

Like her IDW counterpart, Alopex brandishes a pair of kama prior to getting her hands on the Cursed Blades of Vengeance.

Retrieved from "https://turtlepedia.fandom.com/wiki/Kama?oldid=516972"
Community content is available under CC-BY-SA unless otherwise noted.