Look! Up in midair! It's the totally thrillin' Jump Attack Jujitsu Raph-and he's ready for Foot-slappin', Jujitsu-jammin' hijinks! The party's on when rad Raph recoils into his take-off position. And with a mighty Mutant thrust, it's up, up and alley-oop! A darin' Ninja midair attack flip and kick-that's incredible! And that's for flatout freakin' out the foolhardy Foot Clan. And for extra added excitement, Raph likes to take his trusty slick sailin' sais along for a rock 'n rollin' ride. You'll never see a Foot fiend left standin' once Jump Attack Jujitsu Raph takes to the air. And to really menace those Mutant meanies, Raph's taken on his original comic book look-the Ninja nightmare is unleashed! 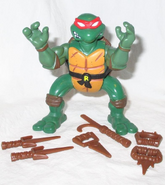 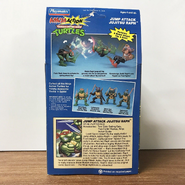 Add a photo to this gallery
Retrieved from "https://turtlepedia.fandom.com/wiki/Jump_Attack_Jujitsu_Raph_(1993_action_figure)?oldid=414027"
Community content is available under CC-BY-SA unless otherwise noted.