John O'Neil is the father of April O'Neil in the IDW comic series.

In recent years, John experienced a stroke that left him wheelchair-bound and reliant on his wife Elizabeth. Their daughter April considered abandoning her studies to help look after him, but her parents argued against it.

Up until his stroke, John was employed as chief assistant at StockGen, the genetics laboratory of Baxter Stockman, which is responsible for the transformation of Splinter and the Turtles into mutants. He also knew of the Ooze, the base material for Stockman's experiments. It was through his initiative that April was able to secure her internship, through which she later became acquainted with the Turtles, but he and his wife already had a hunch that something in this laboratory was not right.

Some time later, the Turtles were traced by agents of the Foot Clan to the O'Neil Farm, while Elizabeth learned of the Turtles in a very dramatic way. After April and Splinter had declared her necessary, Elizabeth received from her daughter a vial of Ooze, which she used to heal her husband from the effects of his stroke. Then they returned to New York to be closer to their daughter, and opened their old antique shop again.

They later invited Casey to live with and work for them there, which attracted the ire of Hun. Fortunately, their neighbors on the same street came out to assist the O'Neils, and peace was restored.

During the Triceraton invasion, John and Elizabeth remained in the Second Time Around store for some days, anxious about April's safety. Eventually April and Baxter Stockman brought them to the T.C.R.I. building, where John and Elizabeth were reunited with their daughter. 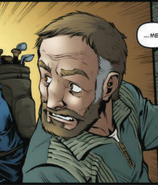 Add a photo to this gallery
Retrieved from "https://turtlepedia.fandom.com/wiki/John_O%27Neil?oldid=513174"
Community content is available under CC-BY-SA unless otherwise noted.