Jennifer Darling (born June 19, 1946; 75 years old) is the American voice actress best known for her roles as Irma in the 1987 animated TV series. She also voiced characters like Buffy Shellhammer. While her body of work as a voice-over artist greatly eclipses that of her on-stage career, she is, perhaps, nevertheless known best to most people as Peggy Callahan, the secretary to Oscar Goldman in the television series The Six Million Dollar Man and The Bionic Woman. 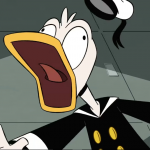