Start a Wiki
In Teenage Mutant Ninja Turtles: Amazing Adventures, Jason, later renamed Mondo Gecko, is a former human who is now a mutant leopard gecko. He is a friend and friendly rival of Michelangelo.

This version of Jason is branched off from his original version in the 2012 TV series. His history before the events of Amazing Adventures is the same as that of his animated version. 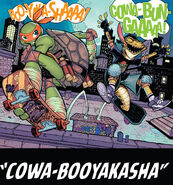 Add a photo to this gallery
Retrieved from "https://turtlepedia.fandom.com/wiki/Jason_(Amazing_Adventures)?oldid=484386"
Community content is available under CC-BY-SA unless otherwise noted.