Jagwar is a member of the Mutanimals in the TMNT Archie comic series and an ally of the Turtles. He is the son of Juntarra and the powerful Jaguar Spirit, and has raised himself since he was twelve. Juntarra raised and taught her son/cub, Jagwar, until he was twelve years old, but, then, restless, she left to continue her personal quest to complete the "Path of The Four Winds", leaving him to fend for himself. At one point he helps the Turtles rescue April O'Neil and the enslaved natives from the Lost Tepui mine.

Jagwar first met the TMNT when the giant, other-worldly, disembodied cow's head, Cudley the Cowlick, dumped the four brothers in his Brazilian jungle, having transported them back to Earth after their participation in an intergalactic adventure. Quickly making friends with one another, Jagwar enlists the TMNT's aid in stopping a band of mercenaries who are plotting to cut down his rain forest home--the villains also recently killed a local union leader, Chico Mendes, and kid napped the American reporter who had come to interview Mendes, who just happens to be the Turtle's good friend, April O'Neil. Defeating the villains, and reuniting with April, Jagwar and his new friends enjoyed several other adventures in South America before parting company.

Shortly thereafter, Jagwar joined forces with several other animalistic humanoids (namely Wingnut, Screwloose, Leatherhead, Dreadmon, Man Ray, and Mondo) to form the super hero team, The Mighty Mutanimals. In the coming months, the group would fight against numerous villains, both on their own, and in collaboration with their allies, the TMNT. Unfortunately, Jagwar, and the other Mighty Mutanimals, came to an untimely, and controversial, end when they were gunned down and murdered by the demon Null's robotic henchmen (TMNT Adventures #54). 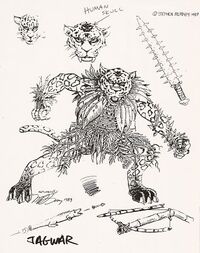 As far back as 1989, Stephen Murphy and Michael Dooney proposed via sketch, an action figure for Jagwar, to Playmates Toys.

Later, as detailed on Stephen Murphy's (now defunct) blog, Playmates planned to release a set of "Global Mutant Missions" that included the Turtles as well as a mutant Komodo dragon, jaguar, gorilla, and Tasmanian devil. Murphy was writing the biographies for the characters, and decided to make the jaguar mutant into Jagwar. Sadly, Jagwar and the Tasmanian devil (which Murphy had fought to make a hero instead of a villain) were canceled, and later, the entire line was shelved.

Retrieved from "https://turtlepedia.fandom.com/wiki/Jagwar_(Archie)?oldid=517734"
Community content is available under CC-BY-SA unless otherwise noted.