Invasion of the Triceratons, part 4

Invasion of the Triceratons, part 4

The war between the Earth Protection Force and the Triceratons reaches a fever pitch as the TMNT plead with Splinter to spare an uneasy ally's life!

As the battle between the Earth Protection Force and Triceratons rages on, Elizabeth and John O'Neil contemplate the scenario around them, as a robot drives them to T.C.R.I.. Meanwhile, John Bishop takes pleasure in using Slash to murdering Triceratons, even as one of his soldiers insists he retreat to safety.

The Ninja Turtles confront Splinter over his deal with Bishop, but Splinter coldly rebukes their questioning, flip-flopping between referring to the Turtles as family and as soldiers. After Splinter leaves them, Michelangelo appeals to Jennika's humanity using the advice he received from Peter Venkman and with Leonardo's help, successfully convinces her that she is a great chunin, but that also comes with not blindly following orders. She tells the Turtles of Splinter's plan to ambush Commander Zom.

John and Baxter Stockman discuss the Mutagen while Elizabeth and April O'Neil talk about the fleets of armored cars, like the one that delivered the O'Neils to T.C.R.I., as April reveals he's not doing this for free. Baxter excuses himself to a shareholder call, and the elder O'Neils recall their observation of Casey's defense of the neighborhood and the demeanor of the Triceratons, when suddenly something John said gives April an idea and she runs off.

On the rooftops, the Turtles get shot at by a Triceraton, and Leonardo and Raphael debate whether it was due to the fog of war, or they are just recklessly shooting. They then come across an EPF sniper shooting down Triceratons, and they beat him and his spotter, but they successfully call for back, which comes in the form of a helicopter full of soldiers.

In their church base, Zom discusses how they are born for war and will succeed at overtaking New York City to use as a bargaining chip. Splinter interrupts her monologue and prepares his assassination attempt, but is interrupted by his sons. 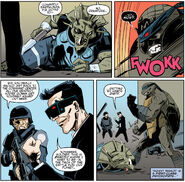 Add a photo to this gallery
Retrieved from "https://turtlepedia.fandom.com/wiki/Invasion_of_the_Triceratons,_part_4?oldid=398188"
Community content is available under CC-BY-SA unless otherwise noted.