In the Mirage continuity, Lord Incubor is the ruler of an unspecified polity in the world of Nocturna. In Raphael: Bad Moon Rising, he kidnapped Lilith and her werewolf Sisterhood.

Incubor was actually involved with Lord Chiton and Sloane in a conspiracy to cast Lilith as an incompetent mother to Lucrezia, and to shift the child custody battle over Lucrezia in Chiton's favor, and effectively destroy Lilith's Sisterhood by turning all the werewolves into undead zombies, all while casting Chiton as everyone's hero. Incubor also retrieved the rest of Sloane's missing soul to return to her. In exchange, Incubor would be paid a large sum of money for his role in the gambit, including all damages Chiton's army would inflict against Incubor's assets and all medical bills for Incubor's injuries.

Raphael and Shadow Jones, who had served as pawns in the gambit, discovered Chiton and Sloane closing their secret business transaction with Incubor. Incubor quickly fled the scene, but Chiton blackmailed the uncle and niece into keeping silent about the conspiracy if they wished to return safely home to their own world. 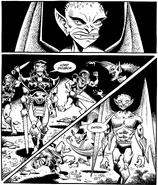