In this one-of-a-kind collection of The History of The Teenage Mutant Ninja Turtles, fans can have eight historical versions of Leonardo, starting with 1984 original comic book and going through the 2014 live action movie.

Display platforms connect with each other to create one ultimate Leonardo collector display.

Every Leonardo is fully articulated and includes his iconic Katana swords.

Each figure comes with their own sewer-lid display platform, identifying the year and the TMNT brand logo used when the figure was released.

The reason that 2007 CGI movie Leonardo was not included is because the tooling device got destroyed in China which made it impossible to make any new copies of the 2007 figure. 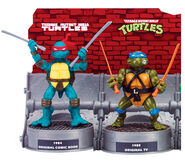 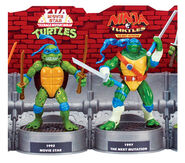 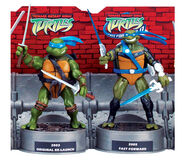 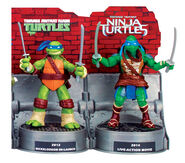 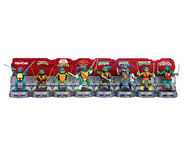 Add a photo to this gallery
Retrieved from "https://turtlepedia.fandom.com/wiki/History_of_Teenage_Mutant_Ninja_Turtles_featuring_Leonardo?oldid=481723"
Community content is available under CC-BY-SA unless otherwise noted.