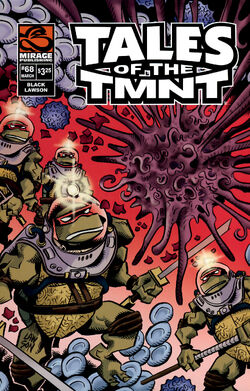 Heroes in a Half Cell is issue #68 of Tales of the TMNT volume 2, published on March 2010 by Mirage Studios. It contains a backup story, A Klunk Adventure.

The title is a reference to "Heroes in a Half Shell," the series pilot of the 1987 TV series. The phrase originated from that series and is not normally associated with the Mirage continuity.

Frontispiece.
Add a photo to this gallery
Retrieved from "https://turtlepedia.fandom.com/wiki/Heroes_in_a_Half_Cell?oldid=509480"
Community content is available under CC-BY-SA unless otherwise noted.