Hector Barrales, also known by his chosen alias Razzmatazz, is a human character first appearing in TMNT: Bebop & Rocksteady Hit the Road. He is a video-blogging aspiring monster hunter from Monterrey, Mexico, who is following leads about cryptids. Rumors of a nocturnal flying monster bring him to the rural town of Carracitos in Nuevo León state, where he meets and befriends Bebop and Rocksteady. Traveling together, the three find their monster: Wingnut and Screwloose.

He was later picked up by the Earth Protection Force because of his connection to Bebop and Rocksteady, and interrogated by Agent Ravenwood. She managed to convince him of her intention to help the mutant pair, and he reluctantly revealed their destination to her. 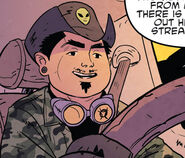 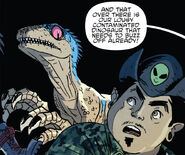 Add a photo to this gallery
Retrieved from "https://turtlepedia.fandom.com/wiki/Hector_Barrales?oldid=504306"
Community content is available under CC-BY-SA unless otherwise noted.