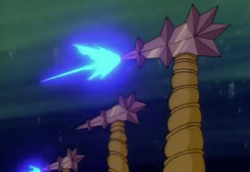 The Hammer of Atlantis is the Atlantean defense system. It's powered by the Star of Atlantis, and is composed of giant laser-shooting towers built around the city. It appears in the episode Atlantis Awakes, where Alim Coelacanth used it to defend against the Technodrome when Shredder tried to attack Atlantis.

Retrieved from "https://turtlepedia.fandom.com/wiki/Hammer_of_Atlantis?oldid=454678"
Community content is available under CC-BY-SA unless otherwise noted.