In Eastman and Laird's Teenage Mutant Ninja Turtles (TMNT vol. 1 issue 1 (May 1984), Hamato Yoshi was once the greatest shadow warrior of the Japanese Foot Clan. He owned a rat named Splinter, who copied his movements as he practiced ninjutsu. He was in love with a woman named Tang Shen. Tang Shen, too, loved Yoshi, but another member of the clan—a jealous, selfish man named Oroku Nagi—wanted Shen for himself. One night he went into Yoshi and Shen's home, and demanded Shen love him. When Nagi was rejected by her, he became enraged, somehow reasoning that if he shouldn't be able to have Tang Shen, nobody could, he began to savagely beating her. Shortly after, Yoshi arrived and in a blind rage, slew Nagi in order to protect Shen.

Since he had murdered another member of his own clan, he was dishonored and forced to choose between suicide or exile to another country. He chose the latter, and Yoshi and the now-recovered Shen fled Japan with their pet rat Splinter, ending up in the United States—specifically, New York City. Years later, Nagi's brother Oroku Saki climbed the ranks of the Foot to become assigned the leader of its New York branch. He followed the two lovers to New York City. There, Yoshi and Shen lived until Nagi's younger brother Oroku Saki arrived to kill them both in revenge. However, the rat Splinter escaped to the sewers and mutated along with the turtles. He then proceeded to teach ninjutsu to the Turtles as he himself had learned it from mimicry of Yoshi, in order to have them avenge his owner's death.

In Tales of the TMNT #22, the Turtles encounter a female ninja with a Shredder gauntlet on her arm; she vows to kill the Turtles for crimes Hamato Yoshi committed against her family, but she is not a member of the Oroku family. This has the turtles wondering if Splinter was not telling them something.

In Turtles Forever, the original Mirage version of the Turtles mention that their "Master Yoshi" was killed by the Shredder, whom they wish to avenge one day. 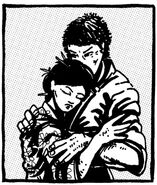 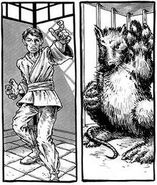 Add a photo to this gallery
Retrieved from "https://turtlepedia.fandom.com/wiki/Hamato_Yoshi_(Mirage)?oldid=492089"
Community content is available under CC-BY-SA unless otherwise noted.