In the Mirage continuity, an alternate version of Hamato Splinter secretly replaced the Turtles's original Master Splinter, sometime after volume 2's Memories of the Future and before the doppelgänger's ultimate death at the Jones Farm in volume 4 issue #10. His existence as a doppelgänger was not confirmed until issue #32 when Donatello was revealed to have secretly cloned the doppelgänger and learnt by accident that he was not the same Splinter who had originally raised Don and his brothers. The original Splinter had taken up residence in the Battle Nexus as the realm's daimyō, and was shown to the reader to still be alive and well there in a surprise reveal in issue #31.

The original Splinter and his doppelgänger appear in virtually every sense identical, having the same physical appearance, apparently most of the same memories, and the same sincere kinship relationship with the Turtles, April O'Neil, Casey Jones, Shadow Jones and other friends and loved ones. The detail that most set them apart was the way they were destined to die: The original Splinter was to someday be killed at the hands of one of his sons and be buried in his native Japan, while the doppelgänger was to die naturally of a heart attack at the Jones Farm in the year 2002 and be cremated in Central Park.

Since volume 4 ceased publication without a final resolution of its storyline, it has never been made clear exactly when the doppelgänger assumed the life of the original, leaving it entirely possible that some, most or all of the stories between Memories of the Future and volume 4 (including interquel stories published in Tales of the TMNT) may feature the doppelgänger Splinter rather than the original Splinter. Outside of volume 4 itself, there is only one story where this is certainly true: The Pantheon, where the story's Splinter is confirmed to be the same Splinter who will later die in V4 #10. It was the doppelgänger, not the original, whom the Pantheon offered the opportunity to become the new King of the Rats, replacing the disgraced Rat King; Splinter initially declined the offer, but would be offered the chance again at the moment of his future death, though whether he accepts or declines the offer then is never revealed. 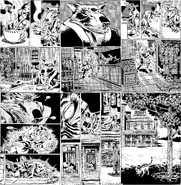 Add a photo to this gallery
Retrieved from "https://turtlepedia.fandom.com/wiki/Hamato_Splinter_(alternate)_(Mirage)?oldid=565875"
Community content is available under CC-BY-SA unless otherwise noted.