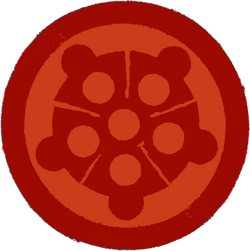 The Hamato Clan and the Foot Clan were centenarian enemies.

The Hamato Clan were responsible for the temporary extinction of the Foot Clan, the oldest of all ninja clans. In their final attack to the Foot, Hamato Yuuta killed Oroku Keiji, the leader of the Foot Clan, and took his son, Oroku Saki, as a baby and raised him as his own.

Yuuta also had a son of his own blood, Hamato Yoshi, Saki and Yoshi grew together, competing in all matters as brothers do, even in love.

Saki and Yoshi met the young Tang Shen, and both fell in love with her. Although Saki got to be with her, at the end she chose Yoshi and with him had a daughter named Hamato Miwa. Saki then learned his true origins, in rage he attacked Yoshi, accidentally killed Tang Shen and took away their baby girl without Yoshi's knowledge. Saki, now scarred for life, begun to rebuild the Foot Clan, converting the Hamato Clan to the Foot's ideologies.

After his wife was lost and his baby daughter taken by Saki, Yoshi went to America to start a new life. There, he bought four little turtles. However, due to an accident, he and the turtles mutated and Yoshi raised them as his sons in addition to teaching them the ancient arts of the Hamato Clan.

15 years later, Saki found out that Yoshi was still alive and followed him to end what they started.

Retrieved from "https://turtlepedia.fandom.com/wiki/Hamato_Clan_(2012_TV_series)?oldid=488672"
Community content is available under CC-BY-SA unless otherwise noted.