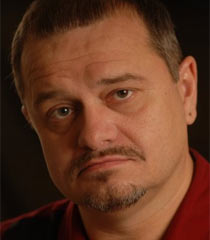 Greg Baldwin (born September 13, 1960; 59 years old) is an American voice actor. He was born in Grants, New Mexico, and raised in Spring, Texas, he currently resides in the San Fernando Valley with Melissa Baldwin, his wife of twenty-eight years and their two children, Sydney and Cooper. He is not related to fellow actor Alec Baldwin.

He has worked in the theatre extensively, appearing as (among others) Sidney Lipton in God's Favorite, Mushnik in Little Shop Of Horrors, Dr. Zubritsky in Neil Simon's Fools and Count Otto Von Bruno in Bullshot Crummond. Primarily known as a voiceover actor, some of his roles include Boris The Cosmonaut Monkey in Brandy & Mr. Whiskers, Daddy Bailey in Xiaolin Showdown and Jack M. Crazyfish in SpongeBob SquarePants. His voice can also be heard on numerous video games, such as Rainbow 6: Lockdown, Assassin's Creed 2, F.E.A.R. and Bioshock, among many others. He took over the role of Iroh on Avatar: The Last Airbender after the death of the original voice actor, Mako, whose techniques Baldwin studied over the years. He voices Aku from Samurai Jack—also originally voiced by Mako—in Cartoon Network Universe: FusionFall and Samurai Jack's fifth season. He voiced the ancient Jedi Master Tera Sinube on Star Wars: The Clone Wars. He also voiced the character Gilbert Gassenarl on Valkyria Chronicles II.

He provided additional voices in the 2007 film. Baldwin performed a substantial portion of Splinter's dialogue in the movie after Mako died during production.

Retrieved from "https://turtlepedia.fandom.com/wiki/Greg_Baldwin?oldid=509566"
Community content is available under CC-BY-SA unless otherwise noted.