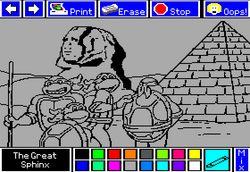 The Great Sphinx of Giza (Arabic: أبو الهول‎, ’Abū al-Hawl, literally "the Father of Dread") is a massive limestone statue of a sphinx, situated in Egypt's Giza Plateau.

The Great Sphinx oddly appears in the background of the Mt. Olympus stage in Teenage Mutant Ninja Turtles: Tournament Fighters - well over 2000 miles from where it is supposed to be situated.

The Great Sphinx also appears in The Flash/Reverse Flash's Super Move in Injustice 2, as the user travels back in time to a platform next to the ostensibly under construction Sphinx, smashing his opponent into the statue's nose and breaking it off.

Retrieved from "https://turtlepedia.fandom.com/wiki/Great_Sphinx_of_Giza?oldid=513255"
Community content is available under CC-BY-SA unless otherwise noted.