The Gravitic Equalizer was drawn by Kirby King for Donatello in Kirby and the Warp Crystal.

The Gravitic Equalizer consists of a metal casing which wraps around the forearm of the user, a fire button that is pressed with the thumb, and three outlets for which the rays are fired from.

According to Kirby's words, this device cancels the gravity equation, so that the attraction of a planetoid no longer affects the objects shot by the device; so that they helpless shoot up into the sky. For some reason, however, the weapon was unreliable and failed after a few shots, but Donatello could still use it as a makeshift club. 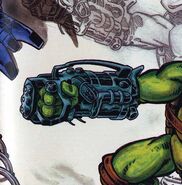 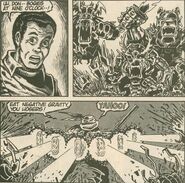 Add a photo to this gallery
Retrieved from "https://turtlepedia.fandom.com/wiki/Gravitic_Equalizer?oldid=425631"
Community content is available under CC-BY-SA unless otherwise noted.