Granitor was created by Krang, just like the other Stone Warriors, from the rocks of Dimension X when the mutagen touched them, and was indoctrinated to be a warrior for Krang who he owed ​​absolute loyalty and lived only for war. In addition to his creator, he was also under the commander of the supreme commander of the Stone Warriors General Traag.

Granitor was General Tragg's right hand man, and one of Krang's loyal soldiers from Dimension X. Granitor came in conflict with the Turtles when he accompanied General Traag when they were pursuing a youthful gang of rogue Neutrino kids named Kala, Dask, and Zak through a battlefield in Dimension X. Granitor and Traag came following the Neutrinos through the dimensional portal, when they were inadvertently summoned to Earth's dimension. by Shredder, who was experimenting with the Trans-Dimensional Portal aboard the Technodrome. After a small skirmish with the Turtles, the Neutrinos teamed up with them. He and Traag pursued the Neutrinos through New York City, despite the attempts by both the police and military to subdue them. They were even successful in driving the Ninja Turtles into a full retreat. Their fight with the Turtles eventually resulted in Michelangelo and Donatello sending both Granitor and General Tragg back through the portal and to their own dimension. After that, he no longer appeared in the series. 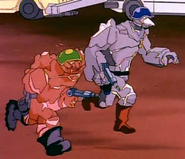 Add a photo to this gallery
Retrieved from "https://turtlepedia.fandom.com/wiki/Granitor_(1987_TV_series)?oldid=400375"
Community content is available under CC-BY-SA unless otherwise noted.