Mrs. Gonzalez is an elderly female squirrel mutant resident of Mutant Town. She is met by Jennika, who asks how she is adapting. Mrs. Gonzalez complains about how tough it is to get used to her bushy tail, but says her arthritis has gotten better. Jennika then excused herself when she spotted a mutant rabbit trying to escape the town. The Cure for You

Mrs. Gonzalez was later seen again when Donatello was fixing the plumbing beneath the kitchen sink in her apartment. TMNT #106 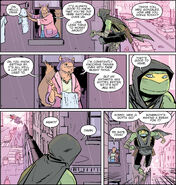 Add a photo to this gallery
Retrieved from "https://turtlepedia.fandom.com/wiki/Gonzalez?oldid=559857"
Community content is available under CC-BY-SA unless otherwise noted.